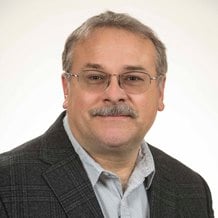 Michael Watkins brings more than 35 years of deep information technology expertise to Cornerstone Advisors, where he shows bank and credit union executives how to realize savings by consolidating and/or merging new technology.

As a director in Cornerstone’s telecommunications, infrastructure, and ATMs Contract Negotiations and Advisory Services practice, Michael calls on his strong background in project management across network administration, network engineering, and phone systems implementation to help financial institutions select ancillary systems that position them for a competitive advantage.

Before joining Cornerstone, Michael was most recently a network engineer for the State of Kansas, where he implemented and administrated the state’s voice network system.

Michael is a contributing author for GonzoBanker, Cornerstone’s blog, and has been quoted and published in numerous industry periodicals.

Michael is a graduate of Washburn Institute of Technology in Topeka, Kan., and holds an ISE certification.

Get in touch with Michael