Clearing Up The Strategy Fog

Do you know the strategy of the bank or credit union that you work for?

If you chose a), congratulations! Self-deception regarding life’s realities is a great coping strategy. You won’t go far in life, but it won’t matter because you’ll convince yourself that you did.

If you answered b), don’t feel bad. You’re not alone, and it’s really not your fault that you don’t know your firm’s strategy. I’ll explain that further in a minute or so.

If you picked c), you’re a true gonzo banker, and I share your pain.

A blurb on Harvard Business Review’s website reported the following:

Surveys suggest that 50 percent of employees don’t have a clear understanding of their company’s strategy. What’s worse, that lack of knowledge is even more pronounced for sales and service employees. Frank Cespedes’ article for ThinkSales “outlines the issues and explains why withholding information about strategy for competitive reasons often results in greater risk for the business.”

If we suspend rational belief for a moment–an easy task for those of you who chose a) above–and take the purported results of these surveys as representative of the banking industry, then it raises an important question:

Why do 50% of employees NOT have a clear understanding of their company’s strategy?

But I would argue that there is another, and much more prevalent, reason why half of employees don’t have a clear understanding of their company’s strategy:

The company doesn’t have a clear strategy. 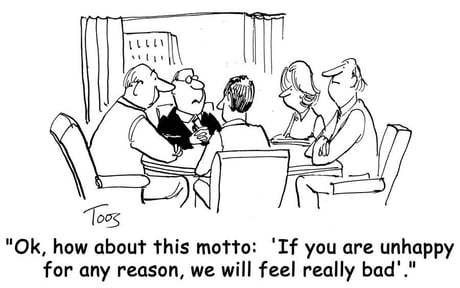 When asked what their firm’s strategy is, there is no shortage of bank and credit union execs who say, “our service.” Sometimes they even throw the word “superior” in there.

Does that mean: “We fix our mistakes better and faster than the other guy!”? Or “We have friendlier people than they do!”? Can they quantify this alleged service superiority? Oh wait! I know! They mean they’re more “convenient” than other banks. Uh huh.

In reality, the default strategy for many banks and credit unions is: “We’re not them.” Where “them” are the mega-banks that the CFPB (Civil servants Fixed on Punishing Banks) would have us believe are evil.

I bet those 50% of employees who don’t have a clear understanding of their firm’s strategy have no clue what their firm won’t do.

I remember an incident a few years back (OK, a lotta years back) when I was a junior IT strategy consultant. The project team and I came back to the home office after interviewing execs and collecting data. The partner in charge asked the team, “So…what’s their IT strategy?” And we unanimously said, “They don’t have one.”

It’s not an employee’s job to figure out the firm’s strategy. Unless, of course, that employee is the CEO. The CEO’s job is to figure out what the strategy is, figure out if it’s the right strategy, and if it isn’t, to correct it and develop a new one, then communicate it, and execute on it. Actually, that’s just one of the CEO’s jobs. What a sucky job that is, eh?

Did you catch all the pieces? Let’s go through them again:

To appease the Harvard dude, we can modify #4 to read “How do we communicate the new strategy…without letting our competitors know what we’re doing?” I think his contention, however, is that this isn’t an important addition in the scheme of things. And I agree.

There is something else that bugs me about the HBR blurb. To refresh your memory (and save you from having to scroll back up), it said:

“What’s worse, that lack of knowledge (of the firm’s strategy) is even more pronounced for sales and service employees.”

This is a serious misinterpretation of the data.

The problem isn’t that sales and service employees don’t know their firms’ strategy. The problem is that they feel the pain of a poorly defined strategy more so than bean-counters sitting in headquarters.

It’s the sales and service folks who have to tell customers “no” because their bosses tell them to, because their incentives are structured in such a way that they personally profit by not giving customers what they want, or because their company has inferior products or services for a particular client or prospect. And, in the back of their minds, while telling the customer “no,” they hear that little voice reminding them what their company’s alleged strategy is. What a sucky job they have, eh? 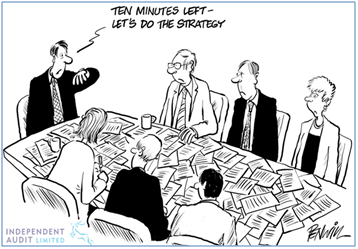 So here we are at a certain point in time.

And so the sins of the past hurt efforts to determine the strategy of the future, because few firms take the time, and expend the effort, to clarify their current strategy, assess it, and figure out if it was design or execution that is causing the under-delivery of promised results.

As a result, the senior exec team may think it knows what the company’s strategy is, but in reality, it isn’t what the plan created last year–or two or three years ago– says it is.

STRATEGY FOG: A state of being in which an organization is unable to clearly see where it is, how it got there, where it’s going, and/or where it should go.

As we look ahead a few short months to the start of the 2016 planning season, many firms–namely those who don’t read this post–will once again repeat the sins of the past, and ignore steps #1 and #2 (and, to a large extent, #4) of the five easy pieces to strategy.

With better clarity regarding the current strategy–and an understanding of why (and to what extent) it is and isn’t working–developing and communicating a new strategy (and how it will be different) becomes a helluva lot easier.

But that still leaves an important question unanswered: How well will the firm execute on the new strategy?

If your organization wasn’t particularly good at executing on the previously-defined strategy, what kind of wacky weed are you smoking that makes you think the company will be good at executing on the new strategy? If you don’t do an honest assessment of capabilities–in the context of the firm’s strategy–you cannot answer the question I just posed.

Bottom line: Strategy formulation is a contextual exercise. That is, it happens within the context of a firm’s current strategy. Without clarity of the current strategy, future strategy development is bound to be flawed. Without this clarity, you may be stuck in a Strategy Fog.

Challengers are picking off bank customers with macro-personalization.   It’s hard to pin down exactly when the term...

Overdraft and Offsetting the Gap

Banks and credit unions should be developing intentional strategies to counter the loss of overdraft fee income.  ...

It’s Dreadful Being a Buyer of Bank Technology

As technology buyers, banking executives need to up their game on tech purchases and technology performance management....