More than 1,700 industry execs descending on the Vegas Cosmopolitan getting mobile alerts like “Open Bar in the Exhibit Hall.” What could possibly go wrong? 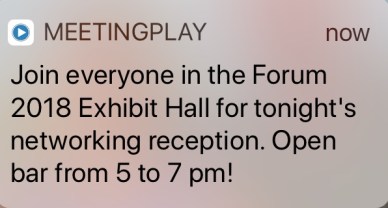 As it turns out, a LOT can go right. Financial Brand Forum, an exponentially growing event now in its fifth year – targeted at the morphing worlds of financial marketing, sales and service – is a well-oiled machine with several coats of highly buffed wax. While I was there as a contributor, I took in some other sessions and hallway chats. In the spirit of FBForum’s coffee-fueled 7X7 sessions, my delivery to you, GonzoBankers, are seven takeaways in an article you can read in less than seven minutes.

While some of the general session presenters felt higher on themes and energy than specifics (anyone remember Chris Farley’s Matt Foley, Motivational-Speaker?), there were some great nuggets in there. The most constructive general session I attended was by Content Marketing Institute’s Joe Pulizzi who laid out a useful “how to” including how to “content tilt” to get messages to stand out for real.

So my seven minutes are up. In closing, Gonzo chutzpah points to Jeffry Pilcher for taking an Android phone audience selfie on stage with Apple-veteran-enthusiast Guy Kawasaki. I almost took an Apple phone selfie with all of that happening in the background. Instead, I just put my phone down. For at least 30 seconds.